On 12th April 2018, the Singapore Zoo announced that Inuka, the first polar bear to be born in the tropics, is in declining health.

Inuka, the last of his kind in Singapore, may be put to sleep at the end of April given his “markedly declining health”, said the Wildlife Reserves Singapore (WRS) on 12th April 2018.

WRS said, “His keepers are closely monitoring his welfare, and his quality of life assessment is under constant review.”

Adopted by SPH Foundation, the charity arm of Singapore Press Holdings, Inuka is scheduled to undergo a second health examination in late April.

If results indicate that Inuka is not improving with intensive treatments, his care team may have to make the “very difficult decision to not allow him to recover from anesthesia on humane and welfare grounds”.

In the past three months, the polar bear’s activity levels have “dipped noticeably”, preferring to rest instead of participating in daily interaction sessions with his keepers.

“The water-loving bear has reduced his swimming sessions significantly, and appears to be less interested in his daily enrichment activity involving a variety of devices such as traffic cones, boomer balls and ice blocks embedded with his favourite food,” added WRS.

While his arthritis, dental issues and occasional ear infections are already being managed, Inuka now has a stiffer gait – particularly noticeable in his hind limbs – which has resulted in abrasions on his paw pads. His age-related general muscle atrophy is also “clearly evident”.

Apart from long-term glucosamine and anti-inflammatory treatment for his arthritis, veterinarians have boosted his daily care regime to include intensive treatment for his feet, and started him on specific painkillers and antibiotics to further alleviate his symptoms.

Check out this article:  Acres is on the lookout for injured otter that is spotted at Pasir Ris Park canel

Daily scheduled interaction sessions with Inuka have been suspended to allow him to “enjoy his time as he pleases”.

Born in 1990 at the Singapore Zoo in the early hours of Dec 26, Inuka would be in its 70s if it were human. Inuka is the first and only polar bear born in the tropics. At 27 years old, Inuka has surpassed the 25 year average lifespan of polar bears under human care and is among the two per cent of the total zoo populations to be placed under a special senior animal care programme.

Polar bears live an average of 25 years under human care, while male polar bears in the wild have a life expectancy of 15 to 18 years.

Inuka, which means “silent stalker” in the Inuit language, is also one of four polar bears to have resided at the zoo to date, including his parents Nanook and Sheba, as well as Anana, a female polar bear caught in the wild.

His father Nanook and mother Sheba arrived at the zoo in 1978 from Winnipeg Zoo in Canada and Cologne Zoo in Germany, respectively.

The zoo had previously announced that polar bears will no longer be part of its exhibits, following discussions with its Animal Welfare and Ethics Committee in 2006.

Check out this article:  Singapore passport "most powerful" in the world

“This is in line with the Zoo’s stronger focus on featuring tropical wildlife and threatened South-east Asian species in need of ex-situ management programmes.”

This means that Inuka is Singapore’s last polar bear, in light of the zoo’s announcement in 2006 that it would no longer bring any more polar bears to an equatorial climate following discussions with its Animal Welfare and Ethics Committee.

Watch this video to see how Inuka celebrated its birthday last year!

Polytechnic lecturer Anita Ryanto has gone to the Singapore Zoo almost every month for the past five years, to paint watercolour illustrations of the zoo’s iconic polar bear, Inuka. “I read in the news in my office that he was very sick and was really sad, so I decided that I must come and sketch him today,” said the 47-year-old lecturer with Ngee Ann Polytechnic’s School of InfoComm Technology.
“I’m sad that he’s getting old, he has a lot of character, and is playful and lovable,” said Ms Ryanto. 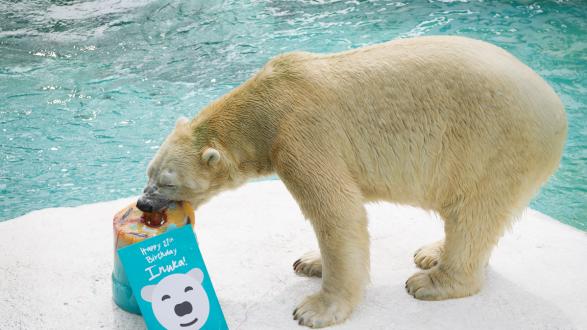 Also there to sketch Inuka was Ms Ryanto’s colleague, Mr Philip Garcia, who has been drawing animals at the Singapore Zoo for the past seven years.

“I got the email about Inuka’s condition today, and figured I should come since his days are numbered,” said Mr Garcia, 61.

“I will definitely be coming as often as I can now to sketch him,” added Ms Ryanto, who hopes to release a tribute book for Inuka filled with her sketches.

“I’ve always felt an emotional connection with that bear.”

It is no secret that Singaporeans love their fried chicken, especially the ones from the famous Filipino fast-food chain, Jollibee.

When people heard that an outlet would be opening at Waterway Point on 18 July (Friday), you can bet that many people were pretty excited about the news.

And to show their enthusiasm, some people started queueing outside the store from as early as 7.30am.

Check out this article:  Singapore Airlines just up their game. They introduce a whole new level of in-flight safety video

Jollibee snapped some pictures of the insane queues and shared them on Facebook to show everyone how well-loved their fried chicken is.

One reason for the long queues was that the first 100 people in the line were entitled to the very adorable Jollibee pillows. The lucky first 5 customers managed to walk away with the limited edition Jollibee Funko POP! Figurine.

Check out this article:  Dog dies onboard United flight: How to ensure safe pet travel

So, if you’re a fried chicken lover and you live near Waterway Point, you definitely need to check Jollibee’s new outlet out (maybe after the queues have died down)!

All good things come to an end — and so it shall be with Hello Kitty. Not the actual character of course, but the themed cafe inspired by the iconic feline character at Changi Airport Terminal 3. Earlier today, the 24-hour eatery announced in a Facebook post that they will officially shut its doors for good on February 8, 2019.

Check out this article:  EZ-Link and NETS' First Ever Collaboration in Cashless Payment

This piece of news came as a shock to Hello Kitty’s throng of diehard fans, who queued up for hours on the cafe’s opening day in May 2016 just to snap selfies with the beloved character. No statement has been issued as to why Hello Kitty Orchard Garden would be closing down, but according to operator Europa Specialty Restaurant, an end of licensing and partnership with Sanrio is the reason for closure.

To mark its departure, the cafe will be throwing tea parties over two weekends in December. It’ll be all fun and games, and don’t forget to savour their feline-shaped waffles and smoked salmon quiche for one last time.

However, be prepared to spend. A ticket for two sells at $138, and it comes with food and drinks, limited edition Orchids For You figurines and exclusive thank-you cards autographed by Hello Kitty herself.

After making a surprise announcement that he was coming to Singapore to film a video, popular travel vlogger NasDaily releases a one miniature long video celebrating all the things we take for granted as citizens of the little red dot.

Nas is famously known for his daily one minute videos which he uploads on his Facebook page, NasDaily. The influencer is known for travelling all over the world and learning about cultures and practices and then making videos about them to educate his viewers.

On Tuesday (21 Aug), Nas put out a post on Facebook announcing that he was visiting Singapore on 22 August and asked fans to gather outside the Singapore Indoor Stadium to be part of his video.

Check out this article:  Singapore Airlines just up their game. They introduce a whole new level of in-flight safety video

On the day, over 700 people turned up to be part of this experience.

The video, which was released on 23 August, is entitled “Why I Hate Singapore” and it basically celebrates Singapore’s ethnic diversity as well as many things that Singaporeans take for granted such as the food and the fact that we have drinkable and clean water running from our taps.

While the video acknowledged problems Singaporeans face such as inequality and the high cost of living, it did so in a way that glossed over the problems and encouraged people to appreciate what we have.

Check out this article:  EZ-Link and NETS' First Ever Collaboration in Cashless Payment

At the event meet up itself, which was changed from outside the Esplanade to the Singapore Sports Hub, which agreed to help the star to shoot his video without break-in any anti-gathering laws, participants got to enjoy Nas’s highly energetic self.

The vlogger talked with fans and gave them a glimpse into what producing his videos took.

Despite the crowd, fans were thrilled to be part of this journey with Nas.

A chicken rice stall at Redhill is selling their chicken rice for $0.54 per plate for Singaporeans aged 54 & above

MOS Burger to open at Waterway Point in Aug 2019